The oldest shopping center in Goiás, opened in 1981 with its first expansion in 1996. The name choice was due to the fact that, at that time, Flamboyant was one of the most abundant and popular trees of Goiânia. With more than 132,000 m² of built area is among the largest malls in Brazil.

It is an absolute leader in the Goian market and it is considered a mark of the State retail commerce.  It is also a leisure and entertainment landmark for the population of Goiás. 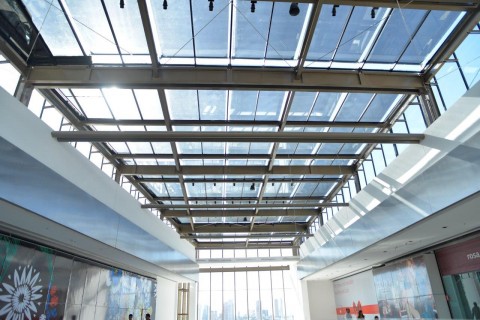 GLAZING TECHNOLOGY APPLIED TO THE ENTERPRISE

Avec Design used in this project the Uniglazing System of prefabricated frames that allow the assembly of the stainless steel supports between two frames to fix the system over the cover. With 2,900 m² of  modern and high transparency glass and 1,500 m² of motorized solar screens, the project is considered the largest ever built with this solution.

The Flamboyant Shopping Mall expansion, the main commercial center of Goiânia, has an unprecedented solution for glazing metallic structures.
The architect Antônio Paulo Cordeiro of the CDCA Rio de Janeiro wanted maximum transparency and, in spite of the enormous glass evolution  in the last 30 years, there is still no glass with high thermal performance that is not mirrored.

On a neutral  Habitat Cebrace glass were applied external micro perforated screens, which are closed at times of high sunlight. They use the indoor hall blinds of Soltis 86 Ferrari, a French company, considered the best in the world with 13% of  light transmission and  25% of solar factor of (only 25% of the heat enters), but still maintaining the transparency. When the day is cloudy or during night time the screens remain retracted, providing total transparency.

Applied by the Solar System of São Paulo, the system belongs to the Italian Resstende with the TK (Traction Kit) technology, which remains stretched even with strong winds.
The mechanical components are all made of stainless steel, aluminum and bronze, being immune to aging. And the engines are from Sonfy with 100Mn.

The product provides benefits such as: Controlled interaction with the external environment; Transparency and beauty; Light control; Thermal and acoustic comfort; Lack of maintenance, among others.

The installation was completed in January 2015. However, the shopping users have been using the technology since November 2014, a pleasant light and thermal control with low energy consumption.